Home » History in the Making: The Presidential Exhibit Tour 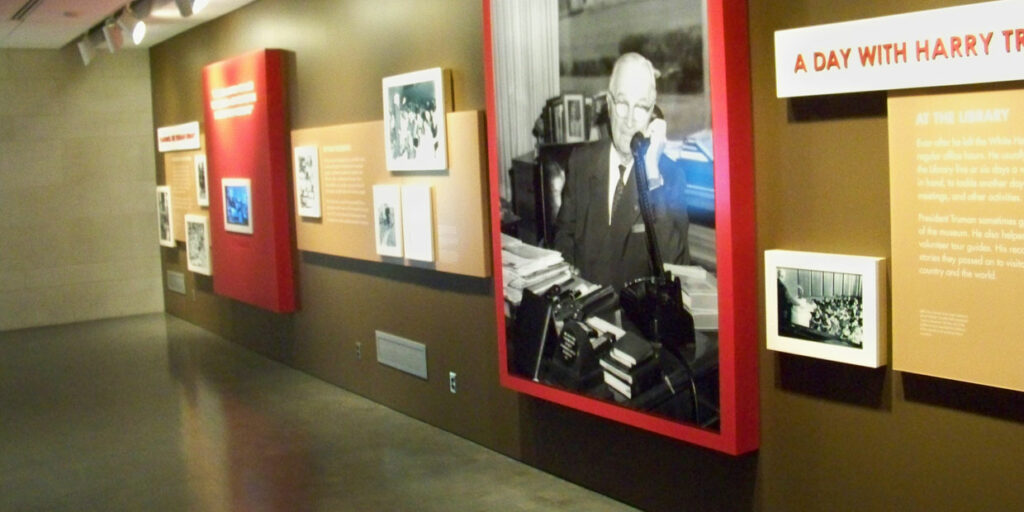 History in the Making: The Presidential Exhibit Tour

In the United States, there are 15 presidential libraries located across the country. These libraries offer interesting exhibits and information about some of our finest presidents in American history.

Some of the ones that we have been fortunate enough to be involved with are the Dwight D. Eisenhower, Harry S. Truman, and Abraham Lincoln Presidential Libraries.

Each of these presidents held that role at a significant time in American history. What did America look like during their terms? How does each of their libraries reflect this?

Dwight D Eisenhower was the 34th president of the United States and he served in that role from 1953 to 1961.

Eisenhower was elected right in the middle of the Korean War and even went over to Korea while he was running in the 1952 election. He was also the president during the early stages of the Cold War.

So, how does the library reflect this? It breaks it down into various stages of his life.

The first part of the library discusses his early years, like his childhood and family life growing up. Then, it goes over to his WWII years, which would lead to his presidency. But before you get to the presidency section, you will notice a small Mamie section.

This section is dedicated to his wife, Mamie, who had an influential role in how the White House operated. Along with this, there is a new section coming soon devoted to all of the women that helped contributed to Eisenhower’s presidency.

Finally, there is a Farewell room along with a Special Exhibits Gallery, in which the Women Unite for Ike will be located.

The installation here is meant to devote specific sections to give people an idea of what made Eisenhower who he was and how he served our country as the President.

You can visit this library in Abilene, Kansas.

What was unique about Truman’s presidency is that he had to take office near the end of WWII. His first year was not by election because he had to step in when the previous president, Franklin D Roosevelt, suddenly passed away.

The main exhibit in the museum focuses on Truman being an ordinary man on an extraordinary journey. It details the story of his upbringing– how he grew up in a rural part of the country on a farm with a lack of conventional education.

The exhibit also discusses how his presidential inauguration was a tragedy because it meant Roosevelt’s death. Truman was thrown into a tumultuous situation which he overcame to step up to the challenge to fill the Presidency.

1220 Exhibits helped to tell Truman’s story and leave his legacy when the museum went through its first renovation in over two decades to try to keep up with modern times. Now, in the center of the museum rests a 10-foot globe with Truman’s name on it. 1220’s outstanding graphics team was also a part of the renovation. They designed and painted the murals that decorate the walls of Truman’s library.

If you want to visit this museum, make a trip to Independence, Missouri.

One of the most famous presidents in the country’s history is Abraham Lincoln. He served during one of the most difficult eras of American history when the country was at war with itself. But, Lincoln helped lead the Union to victory in the Civil War and was instrumental in the movement to abolish slavery. He was the 16th president of the United States and served from 1861 until his assassination in 1865.

The Abraham Lincoln Presidential Library and Museum is a tribute to this fine president.  Like Eisenhower’s museum, Lincoln’s museum is separated by the stages of his life. Journey 1 starts with his early years, mainly involving his childhood and education. Journey 2 is about the events in Lincoln’s life that led to his presidency and how winning the election changed the country.

There is also a separate gallery that includes artifacts not only from Lincoln and his family but also from the Civil War. There is also Union Theater, which is a popular show that portrays the assassination of Abraham Lincoln on that night.

The library also has Lincoln’s Life in Letters along with the Stevenson Room. To visit this library and presidential museum, head to Springfield, IL.

These are just some of the presidential libraries and museums scattered across the United States that you can visit. 1220 Exhibits has been fortunate to play a part in the construction and renovation of each of these locations to provide a lasting piece of history for some of our country’s greatest leaders.

Do you want to know more about the museum exhibition design that went into these locations? Message us today with your questions.

Behind the Scenes with Custom Carpenters and Fabricators

What is Intelligent Woodwork Design?

Creating unforgettable experiences and environments that inspire our clients, their audiences and our team.